A Retrospective of the Year and What's Ahead in 2014

I love looking at all of the titles from the Eon Production James Bond films above. Just about every title I look at I can "hear" the associated theme song. It's hard to pick a favourite but I think I might have to go with Chris Cornell's "You Know My Name" from Casino Royale (2006) in part for Cornell's vocals and lyrics (co-written by David Arnold) as much as the clean, smart looking visuals associated with the song that took a decidedly different approach from the scantily clad and nude women of many of the other songs. Let's have a look at the video:

I do have a soft spot for Paul McCartney and Wings' Live and Let Die (1973) theme song by the same name as well as A-ha's The Living Daylights (1987) theme song. However, if taking an entire film's soundtrack into consideration, my choice has to be On Her Majesty's Secret Service (1969). Having just rewatched this film in the past few months, I was struck by how stirring the music was - the symphonic sound of the opening theme song is epic and resonates throughout the movie. The pinnacle remains for me the heart wrenching gravel voice of Louis Armstrong belt out "We Have All the Time in the World."

I guess my year here at Spyfi & Superspies took off after I returned from my yearly trek to Albuquerque, New Mexico for the Southwest Popular/American Culture Association's annual conference in which I secured a book deal to edit together an anthology of essays analyzing the impact of James Bond on popular culture. Progress is being made in that arena towards a completed manuscript next spring. I also started writing blogs on a semi-regular basis with some months better represented than others. 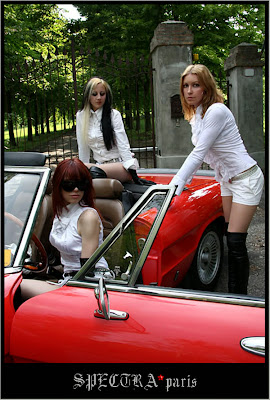 I'll be honest, I was a little surprised that this garnered that much interest!

A fascinating look at Mark Millar's take on the spy tropes in his comic book series.

The nods are everywhere, especially when the James Bond franchise is celebrating 50 years on film!

I'll be honest, Taschen was a big boost here because they posted a link to this blog post. Thank you Taschen -- fantastic books too!

And at the top spot, by a landslide I might add:

A HUGE thank you to Elena Alice Fossi, the creative genius and beauty behind SPECTRA*Paris. She shared my blog post with all of her friends and A LOT of her friends stopped by!

Avenues blossomed as the year progressed and provided me opportunities to contribute articles and photographs of popular culture events in my locale with online publishers that included Bleeding Cool, Fanboy Comics, and The Comics Beat. In fact, as the year draws to a close, I have become a West Coast Correspondent for Bleeding Cool, and I am anxious to cover my usual comic con haunts and hopefully, a few new ones as well.

In 2014, I am already preparing articles that I'll be posting here in the coming weeks that will include reviews and analysis of spy/espionage shows, movies, comics, video games, and merchandise such as toys and spy gear (yeah, really!). I'm also planning a trip to the Ronald Reagan Library in the very near future where the "Spy: The Secret World of Espionage" is currently on exhibition through March 9, 2014.

Well, I'm sure I've probably missed something, but that's the magic of editing [wink], I can go back and add it in later. Anyway, it is hard to believe that 2013 is coming to a close in a few short hours here in bright and the mildly warm climate that is Southern California. I hope you have enjoyed reading my posts throughout 2013. I hope you'll bookmark my blog and stop by every so often in 2014.


Wishing all of my Spyfi & Superspies readers a fond and joyous New Year!

Posted by Michele Brittany at 7:17 PM No comments:

I purchased the December issue (#213) of Total Film this past week because of a short article on the upcoming series, Fleming, starring Dominic Cooper. The four part Bio-drama places Ian Fleming in World War II London at the time of his recruiting into Naval Intelligence. The series will broadcast next month on Sky Atlantic (UK) and BBC America (US).
As I perused the rest of the magazine, I came across two additional articles of Spyfi & Superspies interest. The first one reported on a "first look" at the rebooted 1960s American television series The Man From U.N.C.L.E. currently filming in Rome under the directorial vision of Guy Ritchie (Snatch and Lock, Stock & Two Smoking Barrels). Henry Cavill (Man of Steel) and Arnie Hammer (The Lone Ranger) star as agents Napoleon Solo and Illya Kuryakin originally made famous by Robert Vaughn and David McCallum respectively. The film is set in the 1960s and does not have a release date as yet.

Villain regular Javier Bardem was featured in a lengthy interview to discuss his role in The Counsellor directed by Ridley Scott. Naturally, Bardem's role of the villainous Silva in Skyfall came up when he was asked about how he balances his characters so they don't come off to the viewer as over the top. Of course the suggestive dialogue and touch Silva engages in with Bond at their first meeting was brought up. Here is an excerpt from page 114:

Film Interview: Talking of Silva, was it your idea that he should flirt with Bond and rub his thigh?

Bardem: It was there on the page but it was not really there. Sam and I got together. He said, "Did you read that thing, that possibility?" and I said, "I fucking love that possibility." He said, "I agree, so let's work in that direction and see what comes."

FI: It was brave of Daniel Craig to go along with it....

Bardem: The brave part of that scene was James Bond saying, "Who told you it was my first time?" That's a brave line, and a fucking great line. Whether it's true or not, who cares? Bond is Bond because he knows how to fight the enemy, and the only way to fight Silva is with that line. It dismantles him.

Bardem was then asked if it was true he had been offered the role of Renard in The World Is Not Enough that would be portrayed by Robert Carlyle. Bardem could not recall if that was the role or not but he did express that it was not the right time for him, not until he he was offered Silva. Personally, I think that Silva was the better choice for Bardem because it was a more complex character to get inside of -- it was the role to showcase Bardem's acting skills and innate ability to physically embody a character as well.

And, what was the first Bond film that Bardem saw? It was Roger Moore's Moonraker (1979), which just so happened to feature his favorite Bond villain: Richard Kiel's Jaws.

Posted by Michele Brittany at 9:11 AM 2 comments: