Inside The Secret Service - Part 2 of 2 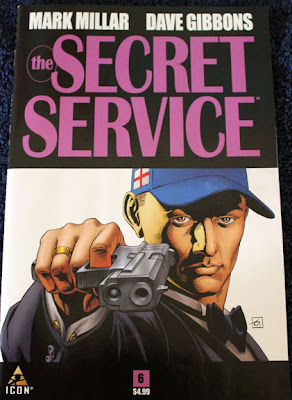 Overview: A six-issue comic book series published by Icon (Marvel Comics) and released April 2012 and finished up this month. The series teams writer Mark Millar (Wanted, Kick-Ass) with Watchman artist Dave Gibbons, to tell the story of Gary, a young hoodlum headed towards a life crime until his uncle steps in and offers Gary an opportunity at a better life. Matthew Vaughn, Andy Lanning, and Angus McKie round out the creative team as co-plotter, inker, and colorist, respectively.

Note: Although every effort will be made to keep them at a minimum, any spoiler alerts will be noted ahead of time.

The Secret Service boasts many gadgets throughout the series. The gadgets, such as jet packs, cyanide spikes, poisonous gas gloves and suits, were reminiscent of 1960s Connery gadgets, while the pen lasers, neural disruptor and the video-linked spy glasses (they incorporated a webcam/microphone/earphone into black rimmed sunglasses), seemed more at home within the Brosnan era of Bond. Both Jack and Gary often resort to gadgets to help them out of particularly sticky situations. In fact, Jack resorted to a gas suit, neural disruptor, and his voice controlled car to escape from a Chinese military building. And Gary, in fighting just one henchman, had to utilize a laundry list of gadgets: the gas glove, stun grenade, dart-firing watch, cyanide spike, and laser pen-knife.

The use of all these gadgets is not in keeping with Craig’s filmic and videogame Bond. Craig mostly used his smart phone, and there is only one instance in which it seems that Jack may have used his smart phone to hack a person’s diary (calendar). With limited use of gadgets, Craig’s Bond depends more on his ingenuity. Much of The Secret Service follows Gary’s story, so even though he depended on gadgets, there were several instances where he relied on his resourcefulness that he learned from growing up with a rough crowd. For example, when Gary wakes up to find himself in some South American country with no clothes and 24 hours to get back to English soil, he is able to commandeer a patrol car, weapons and ammunition, storm a drug lord’s home and hijacks his plane so he can get back home.

In the case of The Secret Service, the gadgets complimented rather than detract from developing the characters in the story. The gadgets incorporated provided a welcoming variety of potentially realistic contraptions to the most absurd, rather than falling into the limitation of one gadget, the smart phone, which happens with recent Bond videogames (such as 007: Blood Stone  and  Quantum of Solace). And, as mentioned above, the gadgets provide many nods to its original source material, James Bond and Q.

The portrayal of women in The Secret Service fair rather badly, in comparison to their Bond Girl counterparts. There are three women identified by name and are drawn with detailed features, but only two that are fleshed out. As it happens, they are both not without their issues.

Gary’s mother, Sharon, is a single mother living with her unemployed boyfriend Darren in an estate flat in a bad part of London. Darren is the father of Gary’s young brother Ryan, however Gary’s father is never mentioned in the series. Unfortunately, all three are regularly abused by Darren through his overbearing, controlling personality. Sharon’s attire is bland; basic shirt and skirt in solid colours. Her hair is always pulled back into a ponytail. Her facial expressions are often haggard and run down. Her relationship with Darren is unhealthy and she unable to discipline Gary in the opening pages of the series. She is powerless and without any apparent control over her life. Added to that, she is apt to blame society for her woes. She is not Bond girl material, nor is she expected to be. She is dependent on the men in her life: Jack to spring Gary out of jail, Darren to put a roof over her head, and Gary to provide her a home. There is promise that perhaps she will gain a certain amount of independence and sense of responsibility for herself and Ryan, but the reader can only speculate.

Then there is Ambrosia, the other most developed female character. She is the lover of Dr. James Arnold and has been with him for some time. She knows about Arnold’s plans for the world, but she is not compelled to take any action until late in the story. Although her attire is not glamorous, she does live an affluent lifestyle provided for her by Arnold: traveling around the world and shopping for instance. Her hair is flowing and free, not pulled back and kept. She is beautiful and attractive, not tired as Sharon is portrayed.

<< SPOILER ALERT – SKIP PARAGRAPH TO AVOID STORY REVEAL >> As the villain’s girlfriend, she is a source of information. Jack pursues and charms her; they make love. Afterwards, Jack tells her he will not insult her intelligence, and she responds that she know that he is looking for information against Arnold.  Guilt arises from her reflection of what Jack must think of her (a loose woman), rather than the fact that she has cheated on Arnold (again, after promising not to). Ambrosia ultimately responds like a conquest of Bond’s, she turns against Arnold, demanding at gunpoint that he abandon his plans. Without hesitation, Arnold orders one of his henchman to kill her and he does. This is not new ground for women in this kind of story. If applying the trope that bad girls must be punished for being promiscuous then Ambrosia was punished with her life.

The third named woman is Teri, the Deputy Training Officer at the spy school. She appears briefly in Issues 3 and 4 as one of the authoritative figures that vocalizes disbelief that Gary is spy material. Although a young, slender blond woman, she does not stand out and is too underdeveloped as a character.

One aspect of the spy school that wasn’t revealed until Issue 6 and that is the existence of co-ed dorms where a couple of female spy students were present. After going back through the other five issues, there in Issue 2 was the presence of a couple of women in the school uniform, participating in maneuvers alongside their male classmates. However, when one of the school tests involves going to the local club to grade their flirting and love making abilities, it was all the male students out for the night. One has to wonder if the female students were in attendance as well, being graded on their ability to charm the opposite sex? Does seem that if they sleep and work out at school, then the women should have been amongst the crowded club scene. It would have been very difficult to tell since the female spy students in the Issues 2 and 6 were devoid of distinguishing facial characteristics: it was the clothes and the indication of breasts is what gave away that there was a female presence at all!

The megalomaniac behind the mysterious kidnapping of celebrities (a lot of them sci-fi, which should have been a clue right there!) is a geeky nerd. His empire, base on cellular phone technology, supported his darker vision: to transmit a certain frequency on cell phones that would cause people to kill each other. Thus, by drastically reducing the burgeoning world population, his actions would turn back population numbers to the early 1800s. His justification: he was saving the rest of the human race. Kidnapping celebrities, such as Mark Hamill and a Bond actor, resembling Pierce Brosnan, was because they were his idols and he wanted to save them from death. Saving the human race was a bit fantastical, especially since he couldn’t watch the death caused when testing of his frequency out. Playing god isn’t a new concept for the Bond villains, but usually it’s for greedy reasons.

There were a few twists to the villain. In one scene he is chastised by his henchman Gazelle for being insensitive by giving nicknames to his subordinates based on a deficiency. For instance, Gazelle was a double amputee fitted with special legs, all paid for by Arnold. One of his other henchmen wore a patch over his missing eye, so Arnold nicknamed him Cyclops. And, Arnold misplaced what was important. He worried about what to wear when meeting Ridley Scott, but he should have been more concerned about Ambrosia’s motives for cheating on him.

Like many of the more recent Bond films, there was a second layer of villains. These were the ones that personal to Jack and Gary. Darren’s cronies challenge Jack in Issue 2 when he is meeting with Gary in the local pub. Gary witnesses as Jack beats all of the cronies into submission. The fight is symbolic for gaining Gary’s freedom from the neighborhood, which will later be revisited in Issue 4. In this second showdown at the local pub, Gary must face Darren and his cronies on his own. Darren has been Gary’s personal nemesis, particularly with regards to how his mother has been mistreated and disrespected by Darren. The fight represents a rite of passage for Gary because although he has just transformed physically into the secret agent protégé, can he ultimately break away from what Darren represents: the old way of life?

One of the biggest departures from Bond is revealed as Jack explains to Gary the wall of framed newspapers. Jack collects the following day’s newspaper as a memento after each mission. While the headlines report on some celebrity event or some other inconsequential event, Jack has risked his life saving the day while the everyday person lives their lives in ignorance. While one would think that Jack might be frustrated by the lack of acknowledgement of his duty to God and Queen, Jack isn’t. He tells Gary that what he does is a service to help people from the behind the veil of secrecy – that’s his job satisfaction. It’s his driving philosophy for being a secret agent, a value that he instills in Gary.

Another observation was the limited interaction between either Jack or Gary with women. Jack has an afternoon with Ambrosia for the purpose of securing information against Arnold, but he isn’t portrayed as a bed-hopping spy. Nor does he seem to have a regular girl friend. Gary is also without a girl friend. In fact, he is inexperienced with wooing the ladies. For example, while Gary surpasses all expectations with the various trials at school, it is the night out to test and hone their flirting skills that baffle Gary. Perhaps Gary is still too young; he reacts with disgust to having watched and listened to Jack and Ambrosia have sex. Gary does focus his attention on his mother, providing her with a better living environment, because he has the means to take care of her. However, at the end of the series, Gary remains alone, having never hooked up at least with one of his female classmates.

The Secret Service pay homage to many aspects of James Bond – the suave spy, the myriad of gadgets, the sporty car with deadly extras, the villain and his henchmen, and women – but Mark Millar also explored the boundaries of being a spy, such as motivation, and gave depth to an otherwise guarded and secretive Bond inspired Jack London. The representation of women is still problematic and familiar tropes of the genre are employed. That said, Gary’s desire to help his mother in spite of her shortcomings is admirable. It reveals Gary’s sense of maturity to forgive and to help those in need without the expectation of anything in return. These values are emphasized and reiterated multiple times leading one to believe that the moral to this tale is one of compassion towards others. 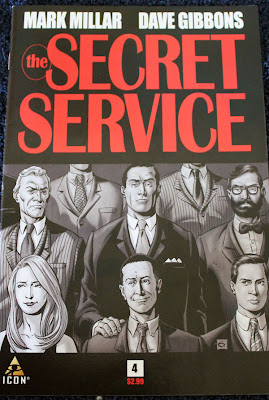 Posted by Michele Brittany at 9:55 PM